AWS’s re:Invent may be over for another year but the announcements keep on coming! Our heads are still spinning from all the excitement and innovations (see our wrap up post) but AWS haven’t stopped.

This week AWS released their Single Sign On (SSO) service. A few years ago, this would have made the cut at re:Invent but this year, with all the other releases something had to give. It’s an important service too so kudos to AWS for announcing it so soon after re:Invent. They could have easily left it to January to give themselves a little composure time after re:Invent but, in the AWS way, they wanted to make it available as soon as it was ready.

AWS SSO is an important capabilities for many organisations as they move to the Cloud. They find themselves consuming services from many providers across IaaS, PaaS and SaaS. Managing access is challenging for both administrators and end users. AWS’s SSO service offers a portal where users login just once to easily access  a bunch of applications. Login is via their corporate credentials . The SSO portal supports access to multiple AWS accounts and to any application that support SAML. It comes with pre-built integrations into Salesforce and Office 365, to name a couple of the headline acts. The screenshot below shows the initial application integrations. 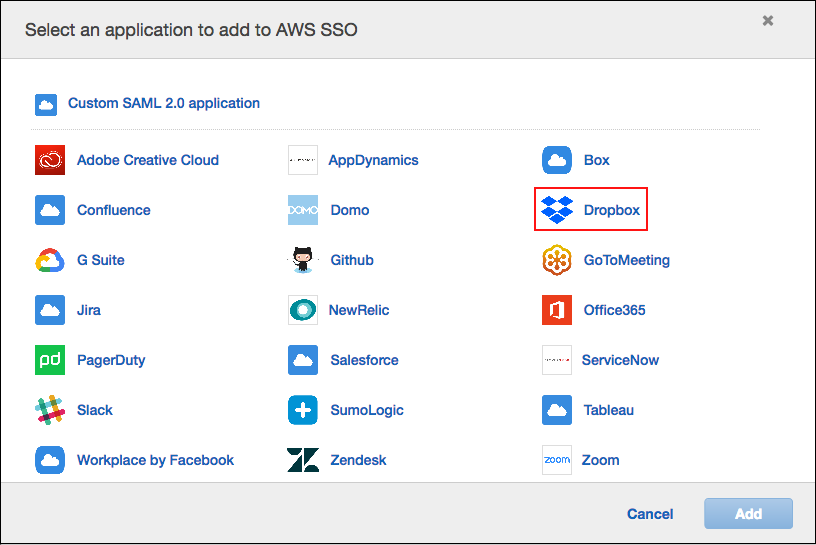 It provides one place to enable access to multiple applications and one point of audit for that access. As you would expect it has deep integration into AWS services providing the ability to easily provide granular level access. If you have a custom application that supports SAML, there is even a wizard for configuring the integration.

It will be interesting to see this new service play out against the established players such as Okta.

In our wrap up of day 1 of re:Invent, we talked about the new multi-write capabilities of Aurora, AWS’s MySQL compatible relational database. We believe this now makes it a truely viable alternative to legacy database providers such as Oracle. Aurora is ready for the big time now.

However, that wasn’t the only significant announcement in the database space. The managed database service on the AWS platform has been evolving over a number of years. At the same time, there has been a move away from “everything relational” with the rise of both noSQL and Graph style databases.

AWS has had a noSQL database, Amazon DynamoDB, for a while. One of the recent’low key’ announcements which may well turn out to be a killer feature is global tables for DynamoDB. This allows you to create tables that are automatically replicated across multiple regions, with full support for multi-master writes. It gives you the ability to build fast, massively scaled applications for a global audience without having to manage the replication process. When you add the auto scaling for capacity and on-demand backups, it’s a massively capable offering that supports immense scale. We see more of our customers using noSQL databases and the evolution of DynamoDB is only going to accelerate that adoption.

Graph databases are optimised to deal with highly connected data. AWS’s new service Neptune is exactly that. Like the other database offerings, it is a fully managed service leaving you to concentrate on your data. It supports many of the popular Graph models and is likely to see uses in social contexts, recommendations, fraud detection and security. With the explosion of data and the importance of how it is connected to many businesses, we expect to see a lot of interest and adoption of Amazon Neptune.

Wow. Can we have a little breather over Christmas, please AWS?