Wow, the week has gone quick. Today is the last full day of re:Invent 2018. Tonight is the big re:Play party, always one of the highlights of the week. Before that, however, we have a number of highlights to share along with catching up from yesterday. Buckle up!

Lambda as a target for ALB

We all love the ALB, a foundation of scalability and availability in the AWS Cloud. It’s a load balancer that directs traffic to either an EC2 or Fargate instance. With today’s announcement, that target can now be a Lamdba function.

This is pretty exciting. The ALB can be configured to direct traffic based on a number of parameters, such as the URI that is called. There’s a fantastic use case for this in using a Lamdba function to process file uploads via a browser, allowing the core web application to continue to serve traffic without any impacts from a batch style operation.

After the mega-announcement of Transit Gateway earlier in the week, there were more VPC related announcement at re:Invent 2018.

The first of these was the concept of Shared VPC. This will allow a centralised account to share a subnet or set of subnets with other accounts. It’s great for organisations that have a limited private IP space available (don’t forgot the golden rule of no overlapping CIDR ranges!). It can also be used to keep control of network routing, ACLs etc. within a centralised network or security team. Now think of the possibilities. How about a centrally managed DMZ distributed across accounts?

The other recent announcement was the ability to bring your own IP range. Until now, all public addresses were allocated from the AWS address space. With BYO IP, you can now import an owned IP range (minimum /24)  into AWS and use that as your public IP pool. It’s great for those workloads that rely on whitelisted access to third party sites and for migrations.

AWS launched VMWare Cloud on AWS in 2017. It allows existing VMWare customers to continue to run VMWare workloads in AWS data centres whilst retaining  their existing VMWare tools. It gives you access to capacity on demand for your VMWare based workloads. Recently, AWS also announced the forthcoming RDS on VMWare, as discussed here.

At re:Invent 2018, AWS has further extended the on-premises offering with the AWS Outposts solution. It’s physical infrastructure, from one server up to a full rack. It allows you to use the same management tools, hardware and functionality across on-premises and AWS. AWS Outposts come in two versions, either running VMWare Cloud or native AWS. Outposts infrastructure is fully managed and supported by AWS.

AWS Outposts can be used to support workloads that need to remain on-premises due to latency requirements, for example.

Even at re:Invent 2018, managing third party software licenses can still be problematic. When you move to the Cloud, it can be even more confusing. AWS License Manager aims to provide more control and visibility over licensing. It will notify you of a license breach. License Manager can even stop a service from launching due to license constraints. It integrates to Service Catalog, Systems Manager and supports AWS Organizations.

Hopefully it will help you avoid the dreaded audit and true-up!

Anyone who has used amazon.com will know that personalized recommendations are a foundation to the success of its marketplace. AWS has provided all the tools to build your own similar solution for a while but it has involved a fair amount of integration of these tools. Launched at re:Invent 2018, is the new Amazon Personalize service, using machine learning. This takes away the undifferentiated heavy lifting (TM Simon Elisha) in running a recommendations service for your customers. It’s a simple process to create a recommendation model and then query it in realtime.

Forecasting future sales to manage inventory has been a dark art for years. Companies rely on all sorts of tools and techniques but ultimately use historical data to try and forecast into the future. Most of the tools are limited in their data sets and don’t take into account other relevant data such as geographic and seasonal patterns.

Amazon.com is one of the largest logistics company in the world and is now sharing some of its knowledge in this areas with the release of the Amazon Forecast service. Forecast is a machine learning based service that aims to improve accuracy using a forecasting model along with historical and related data. 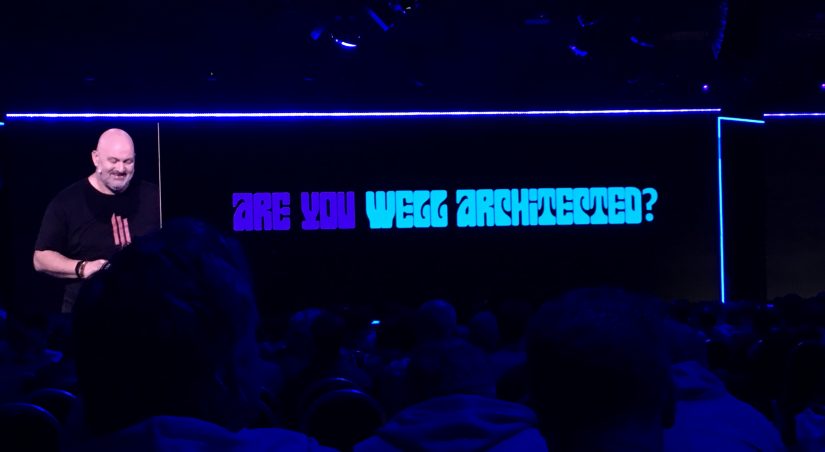 AWS introduced the Well Architected Framework a few years ago. Since then, AWS solution architects have performed thousands of reviews of customer’s AWS based solution. The aim of the review is to benchmark against best practice recommendations across security, operations, performance, resiliency and cost for their applications. It’s a very popular service. As a result, AWS has announced two extensions of Well Architected to ensure it is available to everyone.

That’s a wrap for re:Invent 2018. The conference closes with the re:Play party tonight.

We will let everything we have learnt digest on the long flight home and share a wrap-up next week. Thanks for reading. All the posts from the week can be found here.

Getting started with AWS Cloud Security